The MP and PIP Joints… how they influence each other

The following was written in response to a surgeon user of the Digit Widget asking about MP joint hyperextension when using the Digit Widget. He noted it was most troublesome in the little finger.

The ulnar two fingers, with their mobile CMC joints, have more pronounced collapse deformities of their entire “ray” (all four joints…CMC to DIP) driven by any force imbalance. These include:

2.     An apex palmar, malunited proximal phalangeal fracture with shortening of the dorsal length of the bone that creates an impotent extensor at the PIP joint and secondary MP torque imbalance favoring hyperextension.

3.     An apex dorsal, malunited metacarpal fracture, such as a boxer’s fracture, that creates an “intrinsic minus” type of finger deformity. This develops not entirely from weakness of the interosseous muscles, but from the mechanical imbalance of both intrinsic and extrinsic forces.

We hand surgeons and our patients are fortunate if long-standing PIP contractures have not created MP hyperextension. A hyper-extended MP joint is the enemy of reversing PIP contractures AND of restoring active force balance to all three joints of the problem finger.

3.     Impaired extensor excursion limits the ability of the extensor mechanism to return its lateral bands dorsal to the axis of rotation of the PIP joint. Restoration of mechanical health to the PIP joint requires both proximal & distal as well as dorsal and palmar forces on the lateral bands during active finger motion. Scar from prior injury or surgery that involves the lateral bands and/or Landsmeer’s ligamentous attachments to the same are the kiss of death for restoring active PIP extension.

Dupuytren’s contracture isolated to the PIP joint will slowly pull the PIP joint into flexion. Interestingly, if the patient has just enough Dupuytren’s in the palm to prevent MP hyperextension, the disease will actually prevent the acceleration of the force imbalance and secondary contracture of the PIP joint.  I am currently caring for a patient that has both advanced intrinsic muscle atrophy and weakness from a low ulnar nerve palsy and Dupuytren’s contracture at MP level that is preventing MP hyperextension. His MP level Dupuytren’s is serving as the perfect “built-in splint” to hold his MP’s in neutral or slight flexion so that the full tension and excursion of the extrinsic extensors can be transmitted across the MP joints distally to the IP joints. If the disease advances to the PIP joint, then the surgical treatment should be designed to reverse the PIP contracture but leave enough MP “contracture” to retain this hand’s built in splint.

Successful restoration and post-treatment maintenance of active PIP joint extension requires concomitant analysis of forces at the MP joint. If MP joint hyperextension shares a common etiology to PIP joint flexion (e.g., weak or paralyzed interosseous muscles), then restoration of the PIP to health requires not only reversal of its joint contracture, but concomitant rebalance of tendon forces at MP level. These type problems are far more common and troublesome on the little and ring fingers.

Look for and address every force imbalance that can either cause a primary MP hyperextension or MP hyperextension secondary to the PIP’s troubles. Do this and you will have the best opportunity to maintain the reversal of a given PIP contracture. The best place to start is to look proximal. If there is significant dorsal edema in the hand, the elastic skin gets lifted off the metacarpals and MP’s to create an MP extension torque. In addition, wrists that collapse into flexion with grasp cause or aggravate all claw type deformities of the fingers.

And finally, don’t forget to examine what is going on with the profundus and sublimus tendons from their entry into the A-1 pulley all the way to their phalangeal insertions. Lack of normal tendon excursion, whether primary or secondary, combined with moment arm shift favoring increased flexion torque across the PIP joint, are the second “kisses of death” for reversal of PIP contractures.

Now, let’s examine the value of skeletal extension torque (i.e., the Digit Widget) as a tool in reversing a PIP contracture. For extensor torque to be of value, it needs to focus its effect on PIP joint extension. The counter force for the Widget’s rubber band motor for PIP extension torque is a lever arm that attaches to the dorsal side of the hand (Fig. 1) 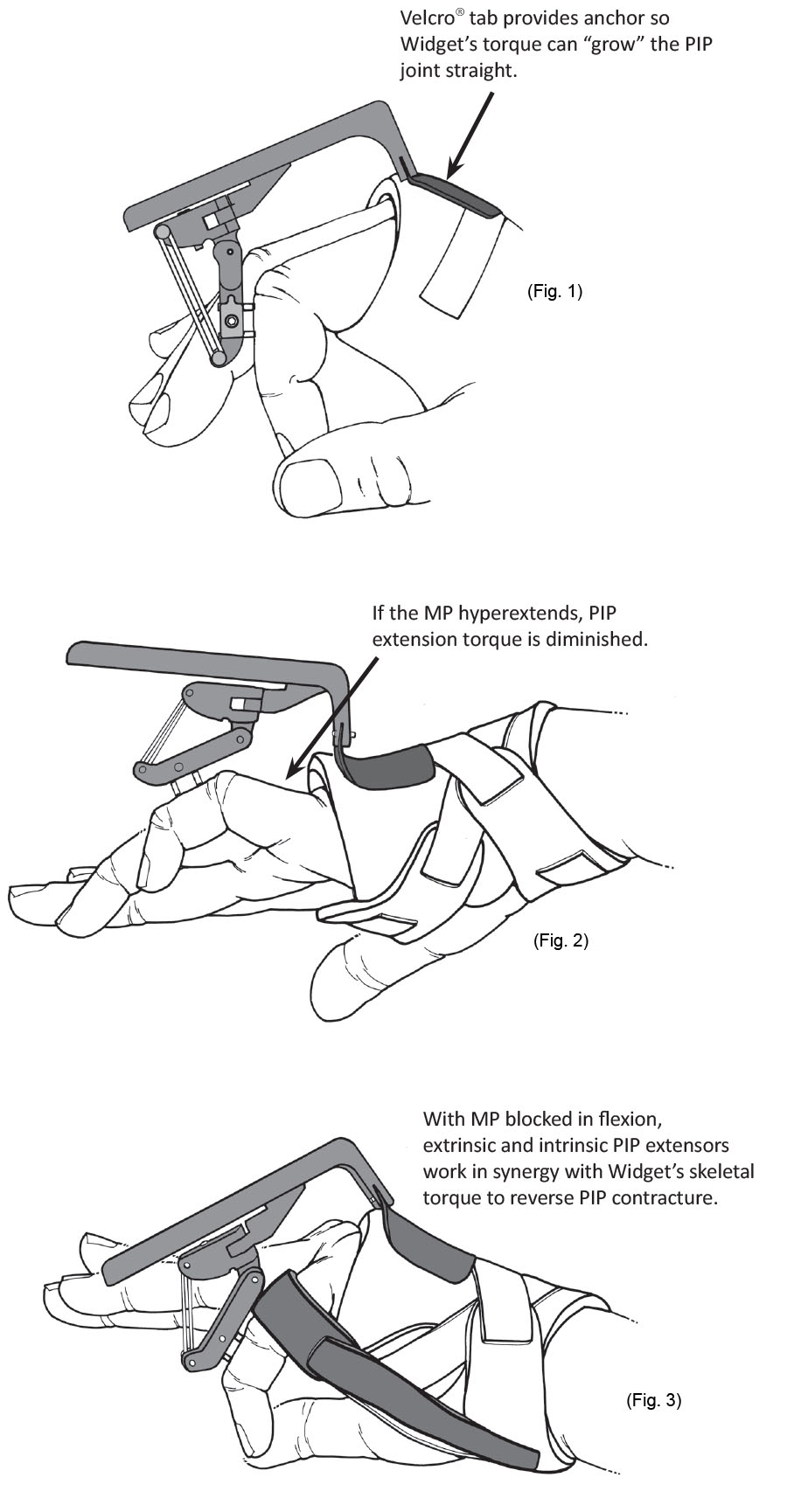 Because it is difficult to keep the hand cuff of the Digit Widget kit situated in the optimal location, preventing MP hyperextension by a separate splint or strap will optimize reversal of the PIP contracture. It is not necessary to hold the MP joint in advanced flexion, but just enough to prevent joint hyperextension (Fig. 3). An MP Flexion Strap is now included in every kit.